Took some star pictures last night, and got another meteor. I wonder what the odds of that are?


Been marveling at the construction of the chair/table conbos along the beach here. They are in some of the pictures. Perhaps the objective was to make them heavy enough to withstand the storms. Whatever the reason, their massiveness and craftsmanship must be admired. There’s a full 2 x 4 frame around the seats, extending out the back; another frame around the base with a stringer across the base and six legs for each seat. If only they were a little more comfortable, they would be the ultimate seating solution.

Well, it just goes to show that if you praise a thing too highly it will turn on you. The weather today started foggy, and just as it looked like it might dry off, it came rolling right back in. Then our view of the lake and horizon, was cut in half by a 40 foot rig pulling into the site next to ours. I guess after some people pay for one of those monstrosities, they are too low on coin to afford a suitably glamorous camp. Well, at least it is good bike riding.

Just learned that my class reunion is to be moved up to the 23rd. So this is making it look like we need to skip Wisconsin, and take the shorter route back through the Land to the North. Another factor is that the yearly permit is $35 in Wisconsin, and the one for this here state is already paid for. So will probably be headed for Pictured Rocks Nationals Lakeshore tomorrow.

Later in the afternoon the ferry to Isle Royal did appear in the fog as it sailed out to the island – got a picture, but not a great one.
Posted by Unknown at 10:45 AM 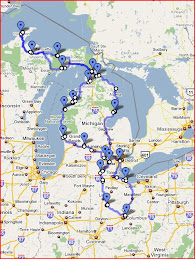 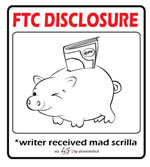